“Sorangens Folkhogskola,” is a local university in Nassjo, a small town in southern Sweden. Since 1987, it has organized one of the most interesting poetry festivals in the world. The “Nassjo poesifestivalen” (http://www.lj.se/poesifestivalen) usually has a thematic focus. Previously, they had an American year when they invited such eminent poets as the New Yorker Ron Padgett; the Chinese year with poets from Kunming, including Yu Jian, Li Chuan, Yang Xuheng, and Yi Sha; and most recently the leading theme was Polish poetry, and three Polish poets were the university’s guests: Adam Zagajewski, Agnieszka Wolny-Hamkało, and guess who – me!

We took a night ferry-boat from Swinoujscie, Poland, and arrived to Malmoe, Sweden, on Saturday morning, June 12, 2010, and then we drove until the early afternoon to get to Nassjo. This is the essence of Swedishness: a natural landscape with no traces of human existence, and a highway with just a few cars dragging along slower than the speed limit.

Nice, but a little unnerving, like other examples of the Swedish phlegm at gas stations, post offices, and in supermarkets, where – instead of serving you immediately and anonymously  – people try to start a friendly conversation, which turns out to be endless and impossible to finish.

After 5 hours of a monotonous journey we reached our destination.  A cozy campus surrounded by old trees was easily accessible from the highway, and it consisted of a few two-floor wooden boardinghouses, circling a flat canteen and a higher building with a small tower, which turned out to be the library.

That’s where all the readings took place. Well, all except for one – our first performance was supposed to be a happening in the main street of the town, where the Polish poets slammed their verse at rare passers-by, trying to enthrall the city smarty-pants.

It wasn’t particularly successful, and it could not have been on a cold rainy day, but the Swedish hosts were very strict about the program: one hour of reading to empty benches in icy gusts of wind, and not a minute less.

Truth be told, Polish poetry sounds good in Swedish. Of course, the translators take the credit for it, and the most deserving of them is Anders Bodegard. The Stockholm-based translator is best known for his masterly renderings of Wisława Szymborska and other Polish poets, such as Zbigniew Herbert, Ewa Lipska or Adam Zagajewski. He has also translated Witold Gombrowicz, Ryszard Kapuściński and Paweł Huelle. However, first and foremost, he has been propagating Polish literature in Sweden and all around the world in countless publications. Additionally, as an academic teacher, he educated a group of brilliant students, who started their own careers as translators of Polish contemporary literature: Irena Gronberg, David Szybek or Stefan Ingvarsson . Their cooperation resulted in an anthology of contemporary Polish poetry, 17 Polska Poeter [17 Polish Poets], which came out in 2003, featuring Mariusz Grzebalski, Jacek Podsiadło, Andrzej Sosnowski, Eugeniusz Tkaczyszyn-Dycki and others, including me.

On the first night of the festival, after a compulsory piano recital of Chopin’s mazurkas, the three Polish poets climbed onto the stage to read their poems. The first was Adam Zagajewski, with Anders Bodegard reading his translations. Zagajewski’s reading was surprisingly fresh: slow and flat, yet intense with emotions, which Bodegard unfailingly captured with his coarse, wonderful voice. I had a feeling that I heard some of his best-known poems for the first time again, and above all “To Go to Lvov,” which had a solemnity and directness of a common prayer.

As for my own performance, I cannot say much – I was so nervous. However, Irena Gronberg, my translator, did a great job, and there was a lot of applause. 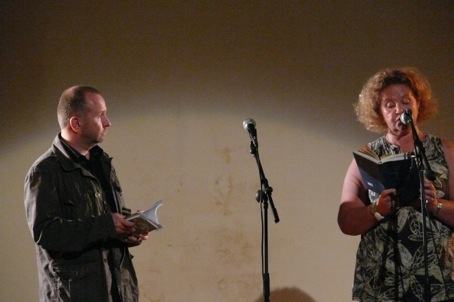 The Swedish critic Asa Beckman claims that Polish contemporary poetry sounds so intriguing in Swedish because it joins two important traditions: the first is the European post-romantic tradition of politically engaged verse while the second is the American tradition of self-reliance and self-aggrandizement.  As a result, the Polish contemporary poem never loses the grip on historical issues and political themes, yet it remains persistently private and subjective.

At the end of the evening, some Swedish poets appeared, and I particularly liked Fredrik Nyberg, who sounds like a Swedish version of Charles Bernstein with his dense repetitive musical word-structures, his fresh imagery, and overall “linguistic” twist. The guy is big – check him out!

Later that night there was a lot of talk, a lot of wine and great Swedish food. Did you know that they have the best potatoes in the world? They boil them with dill and serve with butter. The next day we were going home, and we took a bag of them with us – perhaps the most unpoetic souvenir ever bought on a holiday.

Paweł Marcinkiewicz is an adjunct professor at Opole University, but also a poet, and a translator. He specializes in American poetry, translation, and postcolonial literature. Recently he has published a book of literary theory, The Rhetoric of the City: Robinson Jeffers and A.R. Ammons (Peter Lang, 2009) and a collection of poems, Days (2009). His honors include the Polish Cultural Foundation Award and the Czesław Miłosz Award. Currently he is working on a book on John Ashbery’s poetry.

Three poems by Paweł Marcinkiewicz, translated from the Polish by Piotr Florczyk

Where are the snow and wind
that whipped the apartment blocks
and chased cats under trash containers
and between the bald pines?
The clouds head for rain
while beams of light
and sunny lakes
are growing around us.
The upstairs neighbor’s radio
plays a feeble tune:
a few lonely sounds,
like nothing else here.
It’s the day of the wires
trembling suspensefully
above the vandalized bus stop.
The hour of severe light
that dirties the colors
and slices the shadows.
The moment when sparrows
are flying down from the roof
to cheer up the grass.

Garages beyond the bus terminus, when concrete explodes with dandelion.
Chicks on the fence in the sun, bros on the wall in the shade.
After division, in transfer, dwindling down—
russet mounds of rubble by the pile of booming tires.
The ground feels stuffy, the spirit of the land, the rainbow-coloring of the grass.
Clouds pass above, but the ember of the cigarette burns on.
In remembering, in not-knowing, in the very core—
bare backs, sharp noon,
tomorrow is June.

We were so waiting
for the arctic low to arrive
that when it suddenly bursts with whiteness
we need to get out to meet him.
We can finally feel the towering
Spitsbergen upon our backs.
The time has come
to fall into the arms
of the first snowman
and to put on a carrot nose.
Do come, wind, and shave us
to nothing with the blunt blade
of frozen mud…
The dusk has fallen long ago
and not a trace of the road remains
in the wilderness turned blue from the squall.
Great November:
pure delight in July.