Poetry International, in collaboration with 3:AM Magazine, is pleased to showcase a  group of amazing young European poets. Steven Fowler, the Editor of the Maintenant Interview Series, began this project in January 2010 as a result of experiencing the differing, and inspirational, attitudes of European poetic cultures and how they contrasted to the UK. He said “I really thought it was a shame that poets from outside of the English language in Europe were never recognised until they had reached middle age and a certain ‘prominence’ in their own countries. I also wanted to present a truly representative sense of what poetry is for different traditions and methodologies, from the most traditional to the most avant garde. ”

Audun Mortensen will be one of the four Norwegian poets to visit London on September 25th for the next Maintenant reading with international poets at the Rich Mix centre near Brick Lane in London. It is not as though reading or poetry from nations outside of England have great currency or proliferation, but with these readings we aim to introduce the most interesting, vital and incisive poetry being written by a new generation of poets. Audun Mortensen is certainly that – caustic to the point being oblique, he is reminiscent of Kathy Acker, Stewart Home, Kenneth Goldsmith, driven by a reappropriation of media text and a enforced refusal to engage in the language of posture and criticism. For 3:AM, he speaks to SJ Fowler. 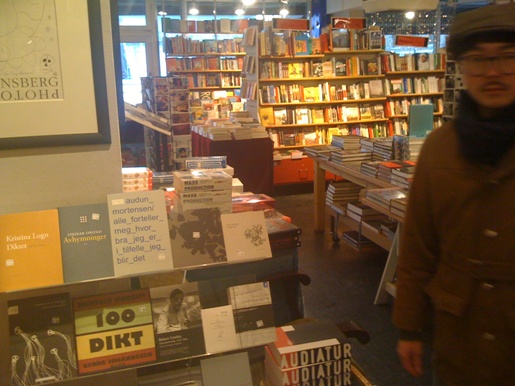 3:AM: Your poetry seems defined by its use of text, perhaps text overextended in the context in which you seem to find it, embrace it, utilise it and spill it out again. Is this the primary action of your poetic?

Audun Mortensen: If ‘find – embrace – utilize/spill’ is referring to a ‘3-step writing practice’, that practice sounds to me, like the most ‘common/natural’ activity/habit for most people I know, whether they produce ‘literature’ or not. Seems fun to get paid by a publishing house for doing that. I don’t think I would refer to it as ‘the primary action of my poetic’ though. ‘Primary action’ maybe. ‘Primal action’ maybe. Sounds like a No Wave group based in NYC late 1970s.

3:AM: Are you being fundamentally satirical?

AM: No. Personally, I try to avoid using terms such as ’satirical’, ‘ironic’ and ’sarcastic’ in any context, and I try to avoid contexts in which those terms may circulate. I try to avoid employing ‘language’ that may evoke effects related to the conventional definitions of those terms. I also try, to some degree, to avoid texts/writers/persons that employ those ‘techniques’ habitually as rhetorical devices. I keep a folder on my MacBook with screen shots from forums, Facebook and other online sources that may, to some degree, exemplify and ’support’ my perspective, but they’re mostly in Norwegian and people might get ‘offended’ or something if you publish them on your website as an appendix to this interview.

3:AM: Are you engaging in the poetry of the lost language of text? Are you trying to redefine that work as poetry and bring a clearer understanding of the construction of the poetic?

AM: To me, it seems interesting to locate a certain type of information in order to exhibit that component as something more ‘monumental’ and ideally, to some degree, ‘activate’ more or less ‘tangible’ connections between distinct components/forms of information.

3:AM: You seem to work within the confines of what might be called the hyperreal or the hypersatirical, is your poetry a prominently postmodern work?

AM: Based on what I just read on Wikipedia.org, my practice seems to a larger extent maybe, to be informed by ‘postmodern philosophy’/’critical theory’ than ‘modernism’ or whatever. It doesn’t seem appealing to be associated with a strictly postmodern framework though. I feel like I would disagree, for a variety of reasons, with most people who brand themselves as self-acclaimed postmodernists or something.

3:AM: Who are your influences in and outside of Norway and poetry? Have they altered heavily as your have grown as a writer?

AM: Lately I’ve mostly read fashion blogs, things on Twitter, and I’ve watched a lot of things on Flickr and movies produced in Hollywood. I enjoy movies starring Leonardo DiCaprio, and TV series such as Dawson’s Creek and Saved by the Bell. And most productions involving Michael Cera, Jesse Eisenberg, Kristen Stewart, and Jason Schwartzman seem interesting to me, for a variety of reasons. There are some design and art journals I’ve enjoyed reading. Sometimes my Norwegian publisher give me some of their books for free. Initially, I wanted to get their entire catalog for free and have every book signed by its author, and at some point, possibly as my publisher reach ‘the tipping point’ and I reach ‘recession’, I’d sell my collection via eBay or a Norwegian equivalent. It would have been easier for me to execute this if I had lived permanently in Norway and been able to drop by my publisher’s office on a regular basis.

3:AM: Could you outline for me your new novel and its methodology?

AM: My novel is titled Roman and it’s a story about how a child and an adult try to figure out how to ‘touch each other’. The novel is based on two distinct narratives. One of the narratives is included on TIME’s 100 Best English-language Novels from 1923 to 2005, and ranked as number four on the Modern Library’s 1998 list of the 100 Best Novels of the 20th century. The other is a tabloid news story, circulating ‘globally’ since the late 1970s. The text was arranged via customized computer software. 118 729 words, 326 pages.

3:AM: You studied at Goldsmiths and lived in London, you seem to have resided in numerous environments that must have influenced your work. Could you outline your studies and how your own writing has adapted to the places you have lived and studied, if at all?

AM: Based on the fact that I’ve processed as much information online as in physical form and communicated via internet as much as via ‘face to face’ the last ~6 years, I don’t feel that my physical environment influences me as much as people tend to suggest. Certain initial ideas and perspectives seem informed by sources via physical proximity, which may or may not inform other ideas and perspectives. Anyway, I generally seem to enjoy employing references to my current geographical and socio-cultural context in my work.

3:AM: What is your relationship to what might be perceived outside of Norway as its poetry tradition over the last 100 years? Are you defined in opposition to the likes of Hauge and Jakobsen? Do you not come across them, even to reject their stance?

3:AM: What is your sense of being a Norwegian poet? That is, do you feel being Norwegian constitutes some part of your poetic? It appears a unique environment, well funded, comfortable, if one chooses it to be. Does it strike you as a unique situation, or do you feel alienated by your status in that regard?

AM: If my ‘poetic’ was somehow related to the fact that I’m Norwegian, it would possibly be primarily manifested in the process of figuring out how to question how being Norwegian/[any nationality] could constitute [anything].

Check out the original interview at: www.maintenant.co.uk

ABOUT THE INTERVIEWER:
SJ Fowler is the author of four poetry collections, Red Museum (Knives Forks and Spoons Press), Fights (Veer books), Minimum Security Prison Dentistry (AAA press) and the Lamb pit (Eggbox publishing). He is the UK poetry editor of Lyrikline and 3:AM magazine, and has had poetry commissioned by the London Sinfonietta and the Tate. He is a full time employee of the British Museum and a postgraduate student at the Contemporary Centre for Poetic Research, University of London. www.sjfowlerpoetry.com –  www.blutkitt.blogspot.com/ – www.youtube.com/fowlerpoetry