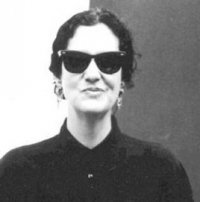 Maggie Jaffe, poet and long time San Diego State Professor, passed away on March 5, 2011. After receiving her BA in Literature from Manhattan’s New School for Social Research in 1975, Maggie moved to San Diego and completed her MA in Literature at San Diego State University in 1984. Maggie’s poetry was published in five volumes and various literary magazines.  Her first book The Body Politic was published in 1989 and her most recent book, Flic(k)s: Poetic Interrogations of American Cinema in 2010. Two of her books 7th Circle and The Prisons received the San Diego Book Award for Poetry. Maggie was nominated for the Pushcart Prize three times and was the recipient of the California Arts Council Grant in 1998 and the National Endowment for the Arts Grant in 2009. Her poetry explored themes of political, economic and cultural issues, addressing subjects such as Vietnam Veterans, Native Americans and the incarcerated. Links to some of Maggie’s published poems can be found below as well as an essay and poem written by Lynn Levin, a long time friend of Maggie’s.

I met Maggie Jaffe in the late nineties when we were both at Vermont College pursuing MFAs in poetry. We became friends quickly. I loved her warmth, her compassion, her intensity, her human understanding. Maggie spoke out against injustices. She wrote powerful, often political, poems about people in dangerous and extreme circumstances: prisoners, suicides, tormented and fame-ravaged movie stars.

Over the years, Maggie and I stayed in touch via e-mail and occasional long phone calls filled with kvetching and laughs. She gave me much writerly advice, which I often call to mind. How crazy busy she always was — teaching, writing, editing, and publishing. I don’t know how she did it all, but she always had time for generosity. How fitting and right that honors came her way. I remember the thrill in her voice when she told me that Dana Gioia had personally called her to tell her she’d won an NEA grant.

After the MFA program, I didn’t see Maggie for almost a decade (we lived on opposite sides of the country) until, in the summer of 2009, we went on a family trip to San Diego. We took Maggie out to dinner, and afterward she and I went to a poetry reading at a local coffeehouse. We had such a good time. But not long after that, Maggie called me in tears about the cancer, a diagnosis that came rolling in on top of a host of other troubles that were stressing her out. Then came the terrible surgery, the chemo she dreaded, the chemo that didn’t work, the doctor’s all-too-accurate prediction of how much time she had left. And then those last phone calls and e-mails. In her poem “Thelma, Louise, and Me” from Flic(k)s, Maggie Jaffe wrote, “We’re trying like hell/to outrun our lives.” If only she could have.

and down the tulip tree

as if to open the wine

with their fur boa,

they skeined their mortal coil.

They were loopy that way,

When they dove to earth

they flounced in their little gray arcs.

over the grizzled green.

They wore me out,

but now they are gone.

They have clawed their way up

to the terrible ether —

two in one year

Links to her some of her poems: