Poetry International, in collaboration with 3:AM Magazine, is pleased to showcase a  group of amazing young European poets. Steven Fowler, the Editor of the Maintenant Interview Series, began this project in January 2010 as a result of experiencing the differing, and inspirational, attitudes of European poetic cultures and how they contrasted to the UK. He said “I really thought it was a shame that poets from outside of the English language in Europe were never recognised until they had reached middle age and a certain ‘prominence’ in their own countries. I also wanted to present a truly representative sense of what poetry is for different traditions and methodologies, from the most traditional to the most avant garde. ”

Representative of a golden generation of Danish poets, Morten Søndergaard is as versatile as he is memorable. Having gained a wide reputation across Europe and the US for his organic adaptation of poetic form, his output over the last few decades has been varied and remarkable. A true blueprint for the future of European letters, he is as comfortable with verse as with sound poetry and his highly humourous, ethical and sensory poetry is a major contribution to Northern European poetics. In a typically generous interview, we present the 48th of the Maintenant series – Morten Søndergaard

3:AM: Your poetry appears to be highly sensory, phenomenological even. You appear to create brackets around your living experience in order to translate this into language, to get the essence of a poetry of being.

Morten Søndergaard: I try to approach both poetry and world by making the two phenomena collide and then see what happens. A line may very well have two origins: A concrete perception and / or words that are making them self present for some reason. It can be because of the words sound qualities, its poetic value, so to speak, or it may be the opposite, that it is a sort of stone which prevents the poem from flapping too much in wind. If I can connect the words with something concrete, something seen and sensed, something true, whatever that means, then I think that the poem didn’t fail or failed better than the last time. So I may have succeeded in reaching an understanding of the world or myself by going on a detour through the language. The shortest path between two points is not always a straight line; it may even be between two words in a poem. I write to feel real and present in the world. I generally experience myself outside of language and reality. A poem, or a word, can be an opportunity for a moment to feel alive and in a state of momentary relaxation.

3:AM: There seems an instigated naivety at times in your work, a deliberate returning to a wide eyed curiosity – though it is an extremely knowing action, an observant humour seems to permeate your poetry too. Is humour and a return to feelings of wonder central to your work?

MS: I’m a naive person. But I am fond of scientific information or philosophical explanation of the worlds condition, of any occurrence of intense attention in the things that surround us. Good poetry is an example of intense attention. As a child, you live with a wide-eyed curiosity, you see everything around you with open eyes and everything can go deep into you without filter. We believe in the adults’ ability to deal with life. As a child we try to do the same, to imitate. What do they do? How do they do it? When the child is a child, it plays games and the games are deadly serious. As a child, all senses are alert. You hear the adults talking, they pass on information, and the child makes the wildest conclusions. As a child the world is a big secret. The child is both a scientist, shipwrecked and a philosopher. As a child you discover that language is crucial. Poetry is language that require a particular kind of childish reading, a slow, intensely observant and playful reading. Just as you read the world when it was full of feelings of wonder.

3:AM: I’d like to speak about your engagement with sound or sound poetry? Did your development of working with sound emanate from poetry or music? Or neither, did it predate your work in poetry?

MS: On the way home from school: Repeating the same words a thousand times, along with the steps, and the words turns into warm chewing gum in the mouth. Both activities, sounds and words have always been parallel for me. Very early I got hold on a tape recorder and with that I made a lot of recordings: flies buzzing against a windowpane, the strings of a piano, walking on gravel etc. A poem often moves on the edge between meaning and sound – sound and significance is the edge a poem can balance on. When I write, I often have the feeling of hearing a noise, and when I work with that noise it slowly turns into a rhythm, a rhythm I can continue writing on. Good poems have a “sound”, like all good art has a “sound”. Also people and occurrences in nature have “sound”.

3:AM: Who do you look as contemporaries or influences in sound art? Cobbing, Bok, Khlebnikov, Schwitters, Apollinaire?

MS: These artist are all great. I listen to all kinds of sound experiments, Bach and Autechre. I prefer instrumental music. When I do sound poetry performance I work with two Korg Kaosspads plus other sound effects and sound machines.

3:AM: Do you think sound poetry has died off as a major concern of European poetic, to be subsumed by conceptual or experimental music? Do you think this division, between music and poetry is this regard is actual / real / valuable?

MS: Poetry is in all kind of languages. That is why we speak of a “poetic” cinema/painting/music etc because the artist has managed to find the poetry in the material. The first language was poetry or a special way of singing words or meanings. I have worked for many years to put sounds and music together with poetry, and I have the feeling of not having arrived somewhere. I still do not know if it’s a good idea. The problem with combining poems with audio is that poetry in itself is already sound and music. But I keep on doing it, because I am sure that music and poetry communicates the same way. That means you should just listen to them if you want to understand them. Some sound poetry performers makes you focus too much on the actual performance, I think you should avoid that.

3:AM: Is there a division in the Danish poetry community and its reception by the wider public between more traditional and more experimental work? Figures like Inger Christensen might give the impression from the outside that there is no such division. What are your thoughts?

MS: I can only answer for myself. I do not think there need to be a contradiction between traditional and experimental poetry. I published a poem collection that was based on my DNA profile, its content was “experimental”, and I have a 40-page poems that takes the starting point in a Greek myth of Orpheus and Eurydice (the poem is trying to figure out what a verse is, i. e. the line break, why do we break the lines in a poem and so on), that poem it is both traditional and experimental. My first poems were possibly very traditional, but were they also the first… Every good poem is an experiment in language, it is a question: Can we formulate the world this way?

3:AM: You seem to be extremely prolific and wide ranging in your poetic activities, editing journals, translating (Borges amongst others it seems) creating projects like the Brøndums Encyklopedi.

MS: I see the different things I do as a mix of the same basic material.

3:AM: But do you belong (or are you said to belong) to a specific movement in Denmark?

MS: I think I have been lucky to be part of some interesting literary projects over the last years. In 1994, a group of poets and editors made a poetical encyclopaedia, in which we set out to gather all poetical knowledge at the time, instead of scientific knowledge. In the encyclopaedia you could look up the definition of words like yes and no and The meaning of life and freedom and love and cannibalism etc. Freedom was written by a prisoner who was king of the prison escapists, the entry fantasy was written by a prostitute, and so on. A lot of poets contributed, around 300, it was a kind of Wikipedia of poets. It sold 40,000 copies, and critics have now labelled the generation from 1990-2000 the encyclopaedia generation in Denmark. After that I joined a group around the poetry magazine Upper Surgery. We started around 2000, and I think it is fair to say that the magazine made an impact on Danish poetry, because it was a wild and anarchic magazine, introducing a more radical and playful kind of writing in Denmark. But a group or a generation is difficult to identify, and these groupings are often constructions made in retrospect. I have been away from Denmark for 8 years, which has given me a chance to see Denmark from outside.

3:AM: Denmark seems to have maintained the strength of its younger poets, and their sustenance and popularity in a far more vital way than many European nations? Is this palpable in Denmark? Is there specific strategies in place to encourage new poets to develop their work?

MS: There is an active scene for poetry, there are many readings, there is a lot of ambition. I wonder if there is a certain poetic focus in the minority languages in general? It applies to Scandinavia at least. In Denmark is even possible to get financial support for literary activity from the government. But writing poems imply a great freedom. Because there are few areas in the world which are not subject to some form of economic regulation. You can argue that the opposite of money is a poem. This gives a freedom which is unique. It also provides an obligation to use that freedom wisely. No one buys poetry, very few people read poetry. It is a problem and a freedom. Still is it possible each day to sit down with a pencil and a piece of paper and write the world’s most incredible poem. It will not cost you anything. You can have the poem it in your head if you do not have paper and pencil. Poetry is a fundamental activity. A strange research which continues to reach the same simple conclusions. But time changes language and changes the world around you so that you have to keep writing with your eyes open to reformulate what it is you see.

Check out the original interview at: www.maintenant.co.uk 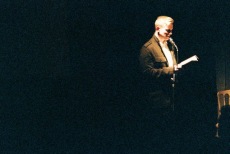 ABOUT THE INTERVIEWER:
SJ Fowler is the author of four poetry collections, Red Museum (Knives Forks and Spoons Press), Fights (Veer books), Minimum Security Prison Dentistry (AAA press) and the Lamb pit (Eggbox publishing). He is the UK poetry editor of Lyrikline and 3:AM magazine, and has had poetry commissioned by the London Sinfonietta and the Tate. He is a full time employee of the British Museum and a postgraduate student at the Contemporary Centre for Poetic Research, University of London. www.sjfowlerpoetry.com –  www.blutkitt.blogspot.com/ – www.youtube.com/fowlerpoetry