In this new series, editors of the Poetry International Chapbook Series and Poetry International staff will discuss the process of running a contemporary press and literary journal: from collaborating with fellow editors to navigating design technologies to promoting a new publication, and all the spaces in between.

Selecting Work For A Chapbook Anthology 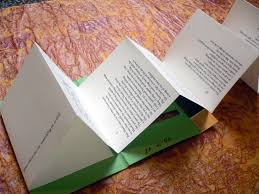 Who doesn’t like samples? Whether it’s at Costco or the Bridal Bazaar, we like having options, exploring new and exciting trends, and not having to commit to any one thing too soon. Many of the instructors in the survey courses I took my college freshman and sophomore years included anthologies in the class schedule. So I got a taste of Sir Philip Sidney, Jonathan Edwards, Percy Bysshe Shelley, Fredrick Douglass, and William Blake—just to name a few. They were very different authors with very different ideas about life and the human condition. Those American and British anthologies gave me a glimpse (sometimes by an excerpt, sometimes a few poems) of who the authors were and why their work was important enough to be in the literary canon. Because of a recent project, I understand just a little bit better how significant each piece in an anthology is.

One of my teammates, Nathan, had a curious design element he conceptualized. He described a book that breaks the traditional rule of a reader moving from left to right. After a number of conversations, we envisioned something playful, something interactive. Something non-committal. Something like a sampling of texts. We agreed on a book that might jar but eventually capture readers with its ambiguity while avoiding vagueness.

We decided on two excerpts on one page. A page that people could flip the top (or bottom) half and shift the order. When a reader read the top half of the page, he or she would have to go on a bit of a scavenger hunt to find the rest of the excerpt by flipping through the book. This out-of-sync design intrigued me. The readers would be interacting with the chapbooks as he or she would thumb through the pages to find the correct, corresponding year (later we changed this to symbols) and the rest of the excerpt. We soon found out that it would be a lot harder than we anticipated. For one thing, there would be both a print and digital edition. How could we make the middle divide on the page have the same effect on an eBook? But we set out to make it happen.

We were excited about the design concept, so our selection process discussion came next. There were several elements we had to take into consideration. The volumes upon volumes of content to pour through and choose from both overwhelmed and comforted me. We initially wanted each excerpt or poem to be from a different publication year, which meant choosing 15-20 excerpts from 15-20 years. We definitely tried and hung on to that idea for a couple of weeks, but ultimately found pieces that were from the same year and that we absolutely couldn’t part with. The board was probably more flexible than most boards when it came to criteria. We decided to look for things that evoked brokenness, fragmentation, ruptures, divisions, and things of that nature. At the same time, we wanted jarring pieces. Because we knew this would be a short book, we wanted to capture our readers on every page. We found pieces on topics like death and pain but—not limiting ourselves—we were open to subjects like happiness and love.

Our advisor emphasized the need to include works by both men and women writers and poets. She introduced us to VIDA: Women in Literary Arts, an organization that is dedicated to recording and publishing what percentage women writers are being represented in the well-known facets of the publishing industry. They expose and celebrate how many women are actually being published annually in the U.S. So we tried to be cognizant about equal representation when reading. While reading we discovered that the majority of bylines belonged to men in their early years of publication, but in the more recently published books there seems to be a more even playing field.

We’ll be working with epubBooks to create a digital edition of our chapbook anthology and working on InDesign for the print edition. The latter is the one I’m most excited about working on with my team to make this concept/idea of an experimental chapbook something tangible.