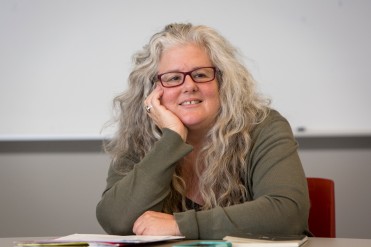 “We used our texting machines / to look up the definition of soul,” Dana Levin begins her fourth poetry collection, a move that destabilizes the reader’s sense of the contemporary moment by linguistically deconstructing the nascent objects with which we are most familiar (here, a cell phone to a “texting machine”) while situating those technologies as tools toward asking, and maybe even answering, eternal questions like, What is a soul? In these two lines, too, Levin models her preoccupations as well as her tendencies toward addressing them in verse. In this poem, “Across the Sea,” the initial dramatic situation is clear: the speaker’s teaching a class and, upon arriving at the word “soul” in a course text, the group pauses, perhaps concerned with the concept’s intricacies, and looks to the internet for illumination—etymological, philosophical, or otherwise.

At the start of any given poem in Banana Palace, Levin’s speakers seem to be at an impasse—of curiosity or consternation. In “Lady Xoc,” we see the speaker relishing the mouthfeel of pronunciations of the eponymous figure’s name—“You’re supposed to say shoke but I like shock. // Lady Shock.”—whereas, in “Urgent Care,” the speaker opens with a start-stop catalog of her immediate preoccupations:

A ball cap that says

will turn blood red and then

disappear for a while,” the TV enthused. Hunched

over an anatomy textbook, a student

In the bathroom, crayoned

This first section of the poem qualifies and re-qualifies the speaker’s train of thought, not so much associatively leaping as, in true Dana Levin fashion, Evel Knievel-ing over wide, logical divides, deep as the Grand Canyon. The student tracing a heart over another heart, the bathroom’s heart graffiti—these obvious associative connections feel like practice for her more unexpected and, indeed, more exhilarating moves.

Out of the twenty-one poems in Banana Palace, “En Route” arguably makes the most venturesome leaps, asking its numbered and titled sections to function as pivot points within a larger arc that can’t be called a narrative, but might be best understood as an accumulation of occurrences toward an emotional climax, the urgency of being. The poem’s epigraph—“one day, from morning to dream”—frames the disparate sections, positioning them chronologically within a single day in the speaker’s life. To some degree, then, the poem asks us to honor the brief, if not routine, dramas of the everyday while we forensically “fill in the blanks” between sections by finding the shortest possible route between point A to point B to point C, and so on. Section one shows the speaker in the morning drizzle, overhearing conversations from people on the street, whereas section two shows the speaker bored during her office hours, changing her religious affiliation to “food” (on Facebook?) and playing (online?) Scrabble, when no student visits her. The poem proceeds like this, perhaps arguing that the linear structure ≄ linear narrative, especially where the internal life is concerned.

This tension between the body’s progress through time versus that of the mind (or, for that matter, the soul) is essential to Levin’s poetry, in all her books. Sky Burial, Levin’s previous collection, rendered this tension primarily through the polarity of bodily death and spiritual death. While this subject matter’s retained as unfinished business in Banana Palace (“You will never get death / out of your system,” she writes in “Fortune Cookie), Levin further complicates the tension through her manifest anxieties about modernity and her inevitable revels in (and, maybe, addictions to) technology. “By the Waters of Lethe” presents Levin the poet at her most cynical and, somewhat paradoxically, at her most vulnerable. “Who will help me avoid my meat / suit?” the poem begins and then, wanting to forget the body, the speaker bemoans: “I need an excarnation / specialist—” Levin, as in many of Banana Palace’s poems, sees apocalypse(s) as inevitable and, faced with that knowledge, she wants to retreat from the world, from the news, from streams of information, and to drink of the river of forgetting:

I get so tired

waiting and waiting for the world to end—

we keep arriving, so much meat born

amongst the racket of bones: the ice slide, the ocean rise, the wrecks

After rattling off the potential and actual threats to our world, the speaker ends the poem with “Fuck that. I’m going back to Camp // Oblivion.” The next poem, “Moo and Thrall,” shows the speaker on her way to get some coffee, only to be bombarded by unwanted anti-abortion protestors with signs plastered with graphic images. With these two poems, one might misread Levin’s book as counsel for ignorance and antipathy toward tragedy, disaster, and violence, but Levin offers something much more complex, emotive, and human than a reading such as that  allows.

From the numerous characters and voices allowed entry into the language of these poems and the multitude of moments that model empathy, Banana Palace establishes itself as a deeply felt exploration into the contemporary moment. The book constructs itself around a sensitivity to the world, to others, and to the self, honoring the mutinies and resiliencies of each, even when they are in conflict. Levin’s inclusion of these moments during which the speaker feels exhausted by empathy pushes Banana Palace toward a poetics of radical honesty, in which the poet-self is fallible and, more than anything, human. One sees this again and again in the book, through a celebration of a cat named Murray and his animal hunger to the meditation on the microscopic cross-section of a banana (from which the collection snags its title). “I couldn’t quite // quit some ideas,” Levin writes in “At the End of My Hours,” the collection’s final poem, perhaps teasing the continuation of Levin’s obsessions, surely metamorphosed by their triangulation with new concerns, in future works.

Beyond her urgent concerns, one cannot spend a great deal of time with Dana Levin’s poems without noticing her skill with language and form. Throughout the collection, Levin peculiarizes language, at both the dictional level (see: “texting machine”) and the syntactical. Toward mimicry or transcription, Levin opens the first section of “At the End of My Hours” with:

(and then a pause) tick

(and then a pause) in greening trees

Sometimes Levin’s language runs out of grammatical bounds for emblematic effect. Otherwise, the most defining feature of Levin’s syntax is her ongoing and skilled use of the em dash. The em dash interrupts thoughts, even as it connects two separate statements. The em dash acts as a kind of fermata, especially when it’s coupled with a line break, or else it speeds us to the next idea, signifying an equivalency, as we see with “pulse—the katydidic tick” from the last excerpt. In addition to the em dash, Levin creates her proprietary experience of poetry through her prolific use of white space. Here, Levin’s art seems to go beyond the poem’s text; her art is the whole page, what’s said and unsaid. Sometimes reading one of her poems feels like seeing the words chiseled in relief into a fine piece of marble—the page is that solid, the white space that necessary.

Banana Palace is further evidence of Levin’s immense skill and heart, and it’s certainly her best book to date. That being said, this is not a book of ease. It requires the reader to submit to its linguistic peculiarities, associative leaps, and unconventional forms, while also reckoning with its high stakes—for the world, for our communities, and for our individual selves. This book bewilders in the best way possible, after Fanny Howe’s ideal, in such a way that, even though I’m not a neuroscientist, I’m pretty sure these poems rewire the brain, tending the reader’s intellect and empathy until their “mind sports god-extensions,” until they praise life.