Hustle: The Reform and Retrospection of David Tomas Martinez

“The Mayans put to death the winners of their games; / but none of my boys have been sacrificed, / and Sundays are less prayer / than fights with strangers running / to their cars to pull their pistols.” 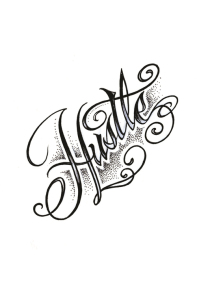 ez: his childhood growing up in San Diego, his time spent running with a gang as a teenager, his enlistment in the Navy, and his eventual escape into the world of poetry. Hustle, Martinez’s debut collection released this year by Sarabande Books, has already received wide acclaim, winning honorable mention for the 2014 Alfredo Cisneros Del Moral Literature Award.

The book contains four parts with poems of varying style and length. The collection exhibits a reflective tone where the reader can look back into the past with the author. An inspiring collection to behold, Hustle reads much like a poetic memoir, full of the visceral emotional richness characteristic of memoirs. Reading “In Chicano Park,” a sense of informed nostalgia can be felt in Martinez’s reflection on time, obligation, and longing:

“No matter if all the murals decay / and the statue of Zapata falls, / more months pile to be swept, and years / ironed, folded, and put away in drawers, / and if jail bars bit off chunks of our view, / remember a wise gambler’s words on craps: / call for the dice back.”

Hustle has many themes: love, lust, masculinity, family, friendship, death, and second chances (or a lack thereof). Martinez takes a very personal approach to poetry, pulling from inside himself to create something beautiful. “You have to be unafraid to make a fool of yourself,” Martinez says. Part of what makes Hustle bold and daring is its depth of description. In “Small Discoveries,” he relates the melancholy of his early youth:

“My childhood is a unicorn; / no, my childhood is a form of taxidermy, of dust, / a kind of myth made in this monkey shack / of skin, where the price of sophistication / is to roll over and expose the tender / underbelly of learning how to play dead.”

Filled with vivid and evocative imagery from his past, Hustle invites readers to take part in Martinez’s retrospective. It is accessible to new readers of poetry, yet leaves much to be pondered by veteran readers. Part one of “Calaveras,” a poem about a time Martinez tried to steal a car, shows the accessible yet complex nature of the author’s writing:

“…nobody gets caught with this, / not because this is a felony, / we speak of prison inevitably, / as likely as sweeps and raids, / as common as falling. / Prison, for us, / taxes and deaths.”

Martinez definitely turns trauma into triumph with Hustle, sharing not only the story of his past, but also revealing the overpowering influence of external social forces, including economics, politics, and familial expectation. Although he’s writing about subjects that are often difficult to discuss (e.g., gangs, violence, illegal drugs, murder, sexual assault), Martinez has woven straw into gold using his memories to craft a beautifully dark collection of poetry. A groundbreaking debut, Hustle is an inspiration and testament to the power of artistic expression.

David Tomas Martinez is a PhD candidate in Creative Wri