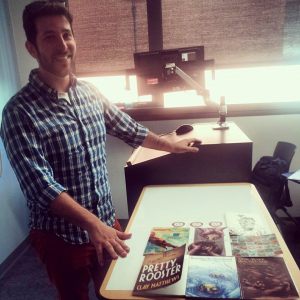 ork and received his MA from Hofstra University and his MFA from the University of Illinois at Urbana-Champaign. Currently, he teaches composition and writing at Grossmont Community College in San Diego, CA and is the Publisher and Editor at Cooper Dillon Books, a small poetry press. Adam has been on the editorial staff for a number of presses and journals including Ninth Letter and Barn Owl, and has been interviewed and written about publishing for Delphi Quarterly, Quarterly Conversation, and diode.

Are you interested in writing other literary genres outside of poetry?

When I started the press, I would have said it’s all poetry all the time. That was why the other founder and I wanted to devote Cooper Dillon to books and chapbooks of poems. But the years have opened my mind up a bit. The press isn’t looking to expand into other genres, but as a writer, I’ve started dabbling in creative nonfiction in the guise of scholarship. Since I spend so much time teaching composition, argument, and applying critical thinking to the real world (in addition to creative writing and literature), I’ve sort of taken on the idea that I wouldn’t ask my students to write something I wouldn’t be willing to write myself. It’s sort of a money-where-your-mouth is kind of thing. The ideas that come up in critical prose are similar to what comes through in poems, but I can write the prose a little faster than the poems, and the ideas are specifically meant to actively converse. I want poems to contribute to dialogue, too, but because of aesthetic elements, it’s a slower exchange.

In a publishing salon I attended at SDSU, you expressed your inclination toward poetic works and their “argumentative nature.” In your opinion, how can poetry be seen as an argument?

Sure! I might have been a little too forceful suggesting that all poems contain argument—but maybe being a guest speaker in a class inspires a bit of antagonism and hyperbole. That is, I don’t read a poem, and immediately ask myself, “What is this poem arguing?” But I do read a poem, and question the ideas it contains, and the point of view, and, yeah, I think arguments start to push through. But the arguments—sometimes, if not most times—seem buried, and it’s a process of patience, perseverance, and study, right? I mean, this is how art can be critical of power and oppressive forces, and still exist: those in power often don’t devote the time needed to understand the argument that’s being made.

In your time with Cooper Dillon have you noticed trends in poetry in the submissions you receive?

We get a lot of variety at Cooper Dillon, but since we started, I feel like collections of prose poems come in more than “regular” poems. But only slightly. I’m not sure if it’s a trend, but, at least from what I see as a reader both for the press and for my own enjoyment, it seems people are experimenting with the limits of genre, and the prose poem seems the most popular way to challenge traditional elements like the line, rhythm, and what people expect from a poem.

Have you found that teaching creative writing to others has had any influence on your aesthetic as a poet?

As a writer and a teacher, my sense is that my students can only benefit so much from my personal aesthetic. I’ve lucked out a bit: I was in an MFA program that seemed to operate on the idea that professors are there to help you do what you do better. I’ve come to believe, pretty completely, that the teacher also has to be a student him/her self, and that means being open to the aesthetics students seem to gravitate toward. I have to be aware of poets I don’t necessarily enjoy, but who might inform a certain kind of writing that the student could really benefit from reading. As a reader, teaching creative writing has opened me up to new aesthetics, for sure.

That reading ends up informing writing, I suppose. I guess I go back to that idea of not asking my students to write things I wouldn’t write. That means if I come up with a prompt, or make a suggestion, I should be willing to try it out myself.

That all sounds well and good, but when I look at my aesthetic, I don’t know if I’ve really moved around that much. Maybe the influences are more like acquiring a variety of new spices, but the base ingredients are a lot more fixed.

What advice would you give to a novice reader of poetry?

This means separating your own expectations and desires, and taking the poem on its own terms. It’s about abandoning what you “like” or “don’t like,” and focusing on what’s there, and, more importantly, why it’s there. There’s a reason for the moves in a poem, and they have nothing to do with what you think you want.

My sense is that if someone can embrace that, not only will they be able to experience more poetry, but they’ll also gain an appreciation for the variety of poetry out there.

You can visit Adam at his website or at cooperdillon.com!