The Gorgeous Passion of Symbolism Regained 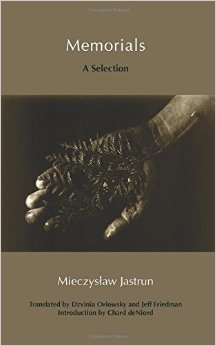 The poems in this collection of Mieczyslaw Jastrun’s Memorials as translated by Dzvinia Orlowsky and Jeff Friedman radiate like milky, incandescent light bulbs. They brighten through the tensile strength of their filaments in a way we cannot see, but the heat of each filament is something we sense in each poem. These poems are opaque thrusts of light which incubate the mystic passion that oversees Jastrun’s memorials to his troubled and irreconcilable experiences and vision of the world. Their apparent opaqueness resists the reader’s immediate grasp of the poems in an attempts to guide the reader through a portal to a deeper, “psycho-mystical” vision of the world. Jastrun, a Jew whose pre-World War II conversion to Catholicism probably saved him from death, supported and participated in the Polish resistance against the Nazis. What he saw during those times intertwine in these poems. A mixture of survivor’s guilt and the blessing of having survived mingle in these works of witness with his struggle to keep faith in a God whom he believed had allowed such horrors to occur.  This struggle permeates and roils as Jastrun wrestles with the constant tension of these conflicting element.

Under the sky where the butchers’ knives
stripped the bloody skin,
I saw those murdered
between the knees of God.

For years, in our animal furs,
we survived the huge blind winters
and the dust storms of wheat
in August.

No one remembers anything.

We shifted from foot to foot
waiting in long lines
for our deaths.

Only one of us asked,
why does God kill us?
Why did he give up on his children
after the Resurrection?

Only one of us waiting
for him to fall
again from the cross cried
“Why has the world forsaken us?” (“Why,” p. 85)

Such a poem as “Why” is, however, rare in the surface lucidity of its sentiment and statement. For the most part Jastrun wants to draw us into the indeterminate perceptions of his sensibilities and faith as they play off of the extremes of his life’s experiences. And for that he uses the more circuitous strategy of symbolism, which, at the risk of sounding pedantic, The Princeton Encyclopedia of Poetry and Poetics defines “as the refinement of the art of ambiguity to express the indeterminate in human sensibilities and in natural phenomena.” For myself as a literalist and a master of the obvious, it is indispensable to keep this in mind when I read Jastrun, since almost all the poems in this collection defy the kind of close reading that I am wont to attempt which would give the reader a semantic equivalent to what the poet is trying to express.

Instead what I find that I must search for in Jastrun’s work is more a mood which suggests the intangibles the poet believes exist but cannot be expressed in words. What we, as readers, then strive for is the acceptance of these experiences which the poems circumvent to offer us that are beyond the words. The paradox is that we cannot truly experience them through our inadequate human senses even though we, somehow, incompletely, do. Jastrun expresses this much better than I in the last three stanzas of his poem “Impressions:”

Fledgling,
when you shut your eyes
what do you feel
with your novice skin?
When you open them,
fire fringes the sky,
red icons flaring.

But what are the names,
the colors of the blind?
We know names for plant and animal
but we’re all clothed in our own smell,
locked in our own vision.

I can’t see or feel faith,
in these extravagances,
only death. (p. 27)

We all become fledglings to the mystical vision Jastrun presents us except Orlowsky and Friedman who write in their introduction “that rhythms in one language can’t be duplicated in another, and meanings often blur as well.” They continue stating that through their “re-shaping the poems in English,” they have “created new texts that carry the spirit and tone of the originals.” If the Polish texts carry this spiritual reality beyond the semantics of words, as I believe they do, then what Orlowsky and Friedman have done truly succeeds.

The various arguments about translation (create a document as true as possible to the poet’s original text or create a document which becomes its own work of art regardless of the poet’s untranslatable idiom) are a seesaw which goes up and down from side to opposing side for as long as those arguing decide to stay on board. Each participant has his or her ups and downs depending upon the moment in the argument to only have it reversed a moment later. There is no final answer nor will there ever be one. Certainly these poems stand on their own in English as meticulously completed, artistic constructions that Orlowsky and Friedman have translated in a manner that I can only describe as gorgeous passion.