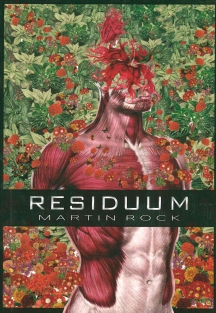 Residuum, noun: “A substance or thing that remains or is left behind.”

Poetry is meant to be evocative and give voice to the themes and concerns of the poet’s time. In our modern, digital, age many poets have toyed with the concept of the ways in which technology can fuse with the natural world and how easy technology has made it to cut out meaning in one’s words. But in Martin Rock’s impressive debut Residuum, he offers a fresh perspective on these notions.

Rock’s approach in his poems is to show not only the finished product but the words that have led to that work’s construction. He does so by including words, and even entire sections, that have lines drawn through them to denote a change or edit in the work. By doing this, Rock’s poems celebrate the edits that would not normally be showcased in the finished product. By including the remains of what the poem could have said or been, his work masterfully drives forward the message that a poem can say so many things depending on the language within its finalized form.

However, it should be recognized that the formatting of incorporating crossed-out words into the poems can leave some readers confused. There is no place in the book that tells the reader how to read the poems, leading one to wonder, should the words or lines that have been crossed out be read or skipped? It is left up to the reader to decide on their interpretation of the proper way to read. Some will find this intriguing, and be drawn more into the poems as they are invited to connect and interact with them. But others may shy away from this nontraditional format and be put off from further reading.

Along with the focus on language, Residuum also explores the relationship between the natural and technological. This impression is given immediately by simply looking over the cover of the book. A striking image that immediately catches one’s attention, the cover depicts the muscle layer of the human body surrounded by nature with a red flower blooming in the place of a head. The title is overlaid across this image in a silver font that is designed in a manner that evokes a feeling of machinery and would be well suited to the cover of a science fiction novel.

The theme of technology sharing space with the natural is then continued throughout the book with photo inserts displaying microscope images of cells and bacteria that are often incorporated with what appears to be motherboard circuitry spread across them. However, this merging does not seem harmonic. The circuitry spreading across the cells gives the impression that technology is taking over and suppressing the natural, or moving so beyond that nature is left behind, both of which being common fears held by many in today’s society.

While Residuum may at first be a little off-putting for the casual reader of poetry, one will soon find that the book is worthy of in-depth exploration. Those who enjoy Residuum will find delight within its pages and find themselves flipping back through it over and over again.